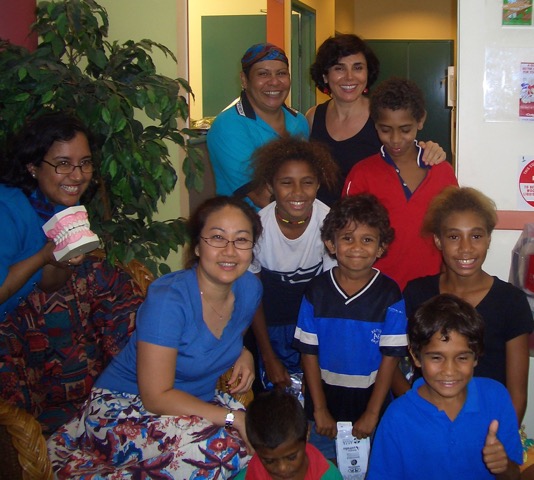 Wuchopperen had a purpose-built, dental facility with two fully equipped clinics, a similarly well-equipped mobile dental van, and facilities for a dental technician. But in 2005, it was down to one dentist, one day a week to service their entire community of over 18,000 people. They could not recruit a permanent dentist. At that time there was a chronic shortage of dentists and even the local public hospital couldn’t identify or recruit dentists to serve in the public health system; various forms of unique advertising were tried but that didn’t work. It was really an absurd situation, where, because of the absence of the dentist, whole communities were unable to access services.

There was a year-long wait for treatment at Wuchopperen. There was a one-day a week emergency clinic operating with a local dentist. So often it was a case when people attended with emergency, they had teeth extracted and it was no more than that. There was no preventative work happening.

PARTNERSHIP AS A FIRST PRINCIPLE

Meetings at Wuchopperen with a number of staff and board members were convened. Through discussion it became obvious that the best way to achieve any outcome and support was through partnership. Everyone had to put something on the table, in order to make it work. There had to be a genuine commitment from all parties in the situation;

And that way everyone had to work hard to make sure something happened.  The principle of partnership with commitments from all parties has been a feature of other FTG projects.

Initially FTG made a conscious decision to concentrate on working in one place and making that a successful enterprise.  FTG also saw the importance of setting achievable targets so that the aim within the first year of operation at Wuchopperen was to reach the target of the equivalent of having 26 dentist weeks supplied. That effectively meant raising money for 26 airfares – at least $15,000 to $20,000 to begin with – which was achievable.  FTG also found a well-spring of support within the dental fraternity.

The main focus at this stage was the recruitment of dentists and getting systems into place – for example developing application forms, developing a system to get flights booked and developing systems for reporting back. Basically FTG worked in cooperation with Wuchopperen Aboriginal Health Services and the practice manager. Friendships developed and strong relationships were built up between FTG members and with those people who were working at Wuchopperen.

Founding members of FTG were very aware of the importance respecting community and cultural protocols.  If outsiders were to be invited into communities for work then this had to be managed carefully and with due consideration paid to what is considered culturally appropriate.  Without appropriate respect and acknowledgement services cannot expect to connect and respond to local needs. The Muru Marri Indigenous Health Unit, in the School of Public Health and Community Medicine, University of New South Wales had knowledge, wisdom, insight and ideas about working with Indigenous peoples and cultures in community health based settings.

There was a genuine interest by dentists to do something in the area of Aboriginal health. FTG Board was surprised by the wellspring of goodwill from the dental profession, which was known at the start of the program. The feeling was they had done well as dentists in Australian society.  FTG had commenced its work in 2006 and 2007 and then with the National Apology in February, 2008 there was more recognition of the needs of Indigenous communities, not just around concerns for the Stolen Generation but also a lot of media focus on general health issues that Indigenous communities were facing.

Dentists, like the rest of the community became more aware of the situation. When FTG put forward their idea and began advertising there seemed to be a real willingness for the dental fraternity to engage.

There has been a tradition of dentists being involved in volunteering in programs overseas but until FTG began its work there had not been any system for dentist to work here, in Australia with local Indigenous people.  FTG were also offering one or two week opportunities, which might have been easier than going to another country for four weeks. There was a lot of interest and the idea was taken up with enthusiasm. With FTG paying the airfares and negotiating a partnership arrangement with local communities it was made very easy for the dentists to volunteer.

Testimonies for dentists below show why there was this enthusiasm

“It’s hard to know whose ‘gap’ if most filled in this program.  As an experience in learning about Aboriginal culture and compassion and enthusiasm, we would recommend all dentists take up this wonderful opportunity”

“I worked in a private practice in Sydney for a year and half but would say I had more fun in my three weeks in Cairns than the whole time in NSW.  Treating patients in the mobile dental unit particularly felt like I was doing something really different and worthwhile.”