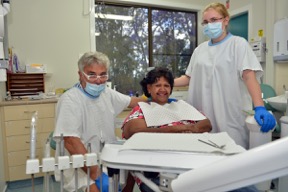 The needs of these communities, falling between two state government arrangements are significant and have been well-documented.

Word had circulated that FTG had been able to meet some dental needs where they weren’t being met. FTG received an invitation to assist that community with dental services and to go and visit the community and start conversations with the community. However the partnership process was challenged because there was no AMS or structural arrangement so that accommodation needs for volunteers could be met.  Nor were the partnership inputs which had been available in previous projects.

The nearest clinic was 10 kilometers away in Goondawindi. This was a Queensland dental health facility located on the Goondawindi hospital campus but QLD would not treat New South Wales patients. The nearest NSW clinics were in a public hospital facility and in Pius X Aboriginal Corporation, both in Moree, 130 kilometers away.  The logistics of having to travel a long way to the dental health services in Moree was a significant barrier, and the affordability and accessibility of the service also presented difficulties.

NONE OF THE MODELS TRIED BEFORE WOULD WORK IN THIS NEW SITUATION, FTG HAD TO BE INNOVATIVE.

Being a relatively small and relatively informal organisation allowed FTG to think ‘outside of the box’ and there was the possibility of working in, out of, and around institutions current institutional arrangements.  Current arrangements were not servicing the communities effectively in terms of meeting oral health needs.

FTG was able then to contact and be in dialogue with chief dental officers in QLD and NSW.  Both of whom acknowledged that none of their strategies would reach and service those communities – the state based services were geared up to work through AMS’s, so if that system wasn’t working then the dental health services, which were meant to be attached would not work either.

FTG was able then to do something unusual and facilitate discussions for a cross border arrangement; where QLD health was able to make a facility available at their Goondawindi campus and NSW would compensate them for the servicing of NSW patients. It was unusual to have such a specific localised arrangement but there was a genuine recognition of the need and recognition of capacity to respond.  The area was recognised as an area of high need and significant resourcing had already been spent in supporting education and welfare programs. It area was already one in which cross departmental work was already occurring from NSW. There was already a program called the ‘Connected Communities Program’ which made the school and the principal a central focus for effort. There was recognition that this was an area of high need and was one of 15 across the state of NSW (that had been identified as such).

After extensive community consultations for more than a year, dialogue with the Chief Dental Officers of Queensland and NSW, the Federal Body of the Australian Dental Association and negotiations between the parties, the Deadly Yirra dental service commenced on October 2, 2012.

The service was delivered at the Goondiwindi Dental clinic on the grounds of Goondiwindi Hospital, under the auspices of the Darling Downs Hospital and Health Board (DDHHB).

A ‘Service Statistics and Community Feedback Report’ was prepared in March 2013 using information collected by DDHHB, patient reviews collected after treatment at the Goondiwindi clinic, feedback from dentists and the Deady Yirra community steering committee (made up of key community members and local stakeholders).  There was a high level of community support and uptake for the service, starting almost immediately. As confidence in the service has grown so have the occasions of service, despite times with reduced levels of service and holiday periods.

In total there were 514 occasions of service in the period from October 2012 to January 2013. See Tables 1 and 2. Note: The reduced level of service in December (1 week) and January (2 weeks) was due to unavailability of dentists and Xmas break; however the weekly average use of the dental service remained higher, despite the holiday period.

The dentists were highly productive as shown through the numbers of occasions of service data (n515). A total of 12 weeks service was provided from October 2012 to January 2013 by three highly experienced retired dentists, their visits alternating with stays for periods between 1 to 3 weeks. A total of 1,592 procedures were undertaken at a total cost of $154,726.  Besides emergency procedures dentists undertook wherever possible a comprehensive treatment regime for patients.

The high level of productivity is strong evidence of high community uptake and reflected the high need for a dental service that is easy to reach, accessible and culturally appropriate. It also reflected community cooperation and organisation, as well as confidence and trust in both the dentists and in the service delivery model.  The number of procedures for such a small community is evidence of how much work was needed and long-term neglect.

Patient feedback included comments such as…

“Staff were professional but friendly, they made all my children feel at ease – particularly my 3 year old daughter who has autism.  If this wonderful service didn’t exist we could not help with our dental issues.”

“It is a great service, saves a lot of time and money when you have a family.  And it is not as far to travel to Moree, 130 kilometers.”

The agreement was that the service was to be provided for 6 months and then another solution had to be found.  At the 6 month point both the QLD and NSW government wanted to reconsider what was going on – for different reasons. However the NSW government then came to an agreement with The Poche Centre at Sydney University who took over, and committed themselves to a long-term ongoing service. That program goes on and now there is a permanent dental service.