Dr Gratiaen has been a volunteer for many years, with opportunities taking him to Vanuatu, the Solomon Islands and Papua New Guinea. He has worked in ‘Filling the Gap’ clinics in Cairns, conducted workshops for Queensland Health, and donated his time to several ADA volunteer clinics.

Paul spoke about his experience at the ADA NSW/ADHF clinic in October. “I had a patient referred through a Salvation Army initiative who was very apprehensive, horrified to see the dentist – I could see the fear in her face. She hadn’t seen a dentist for many years due to anxiety. All of her upper anteriors were destroyed. I asked the patient to take a few deep breaths. Slowly she obliged with the help of music playing through her earphones, and gradually the expression on her face changed as she began to trust my treatment.”

“Following a series of extractions, the patient asked if she could see me for future treatment. The charity offered to transport the patient from Wollongong to the Central Coast NSW Health clinic I practice in, a distance of 180kms. With a request like this, and seeing the change in her face as I was able to relieve her of pain, I don’t think I could expect a better reward. It is experiences like this that prompt me to volunteer.” 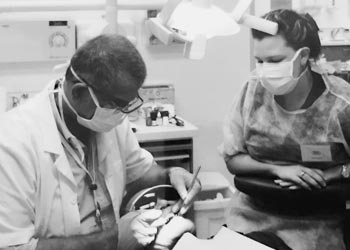 “… Seeing the change in her face as I was able to relieve her of pain, I don’t think I could expect a better reward.”